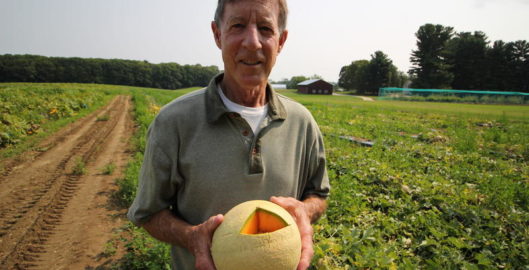 Standing among the ripening melons at Kingman Farm, Brent Loy slices into a cantaloupe with a pocketknife and pulls out an orange wedge.

“So that’s not what I’d call a great color, but it’s sweet.”

Some of the melons at Loy’s feet represent his latest effort to create a melon that has a long shelf-life and what he calls good “eating quality,” a professorial term for tasty. Most melons he says are either long-lasting and lacking in flavor, or tasty and short-lived.

“If you go in the store to get a cantaloupe, you’ll notice they all kind of green and do not have any smell to them. That’s because they have a gene that prevents the melon from going through a normal ripening phase.”

The result: a not-so-tasty melon.

Loy’s working on finding the right gene combination. To do that, he uses selective breeding. He finds two plants with the traits he wants, breeds them, and then, if all goes well, the offspring will have both.

For example: Combine one melon with blight resistance with another that’s super-tasty and, through the power of natural gene combination, you’ll have a flavorful, disease-resistant hybrid melon.

And it’s not just melons. A few rows away are summer squash. Over the years, Loy has bred these to make them easier to pick. Conventional varieties have spiny thorns on the stems. Those thorns can draw blood, so workers have to wear big heavy gloves.

“But this spineless squash, they can pick this and no problem at all!”

Loy’s passion for breeding plants began when he was an undergrad at Oklahoma State. He went on to write a thesis that involved growing melons and squash. When he started at UNH fifty years ago, he saw there was a need for melon varieties that farmers in New England could grow.

So he got to work, and since then, breeding these genetically ideal plants have been just one part of his job. The other part is getting seed companies to market them.

“I could have a hundred hybrids that I think are really good, but if a seed company somewhere doesn’t think that it has merit, then it’s down the drain, so to speak.”

Over the years, Loy says he’s created about 500 hybrids. His work here at Kingman Research Farm and two other locations has yielded more than 60 varieties that appear in seed catalogs across the world.

You have Loy’s research to thank for the melon varieties Halona, Dipomat, and Passport.

When a seed he creates gets into a catalog, UNH gets royalties.

UNH says Loy is responsible for 29 percent of UNH’s cumulative royalties earned since 1999. He says he’s glad these sales support the seed companies, too, especially the local ones like Johnny’s Selected Seeds of Maine and High Mowing Organic Seeds in Vermont.

“Because they offer a lot of local varieties that a big seed company is not going to focus on in the northeast–particularly New England, because there’s not much of a market, acreage-wise.”

He says what it comes down to, ultimately, is the consumer. It bothers him to see, for example, a pile of summer squash at the grocery store treated like what he calls a “commodity,” something that the market knows it needs to have, but doesn’t care much about.

Plus when it comes to variety, he says the supermarket isn’t doing these gourds justice.

“If you go to get an apple, you get to pick out a variety, right? There are all kinds of apple varieties and most of them are pretty good varieties. But consumers have a choice.”

Loy has dozens he thinks customers would like–for example, a Sarah’s Choice melon, named after his wife.

Loy is now winding down his melon research, but he still gets to the field in the morning and tends to his plants.

Next month Loy will be honored by UNH for fifty years of research and innovation in a twilight celebration at Kingman Farm, near the specialized gourds he helped create.